Ghosts of Wardour Castle, near Tisbury 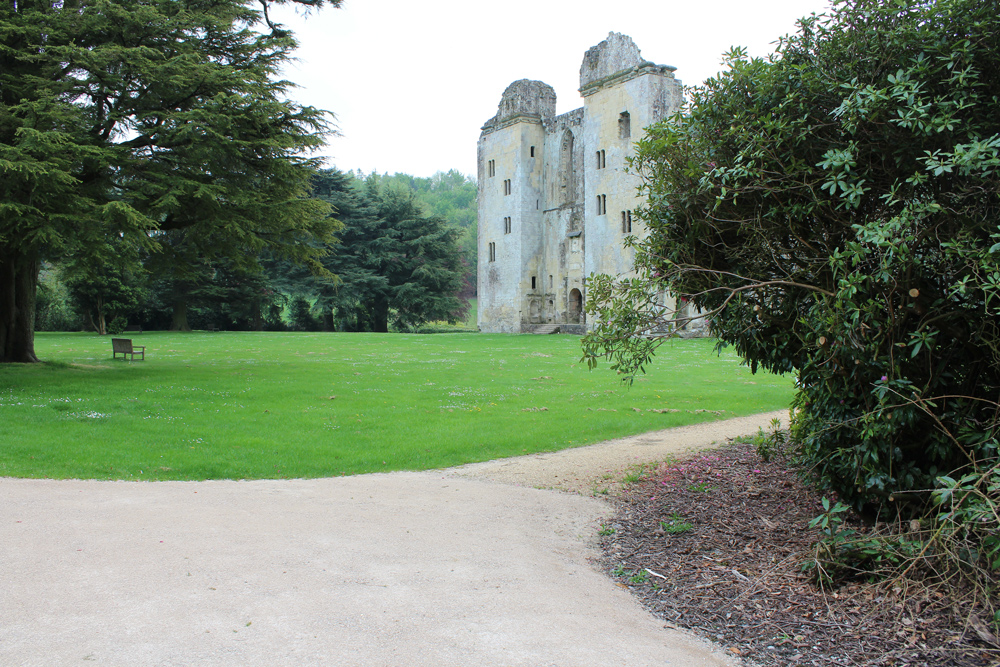 Wardour Castle is one of my favourite local spots where I walk my dogs in the surrounding woodlands. Although it is an English Heritage site, it is generally pretty quiet and off-the-beaten-track. A chance sighting of one of the ghosts of Wardour Castle also adds to the temptation of a visit there.

Next to the castle is a beautiful lily pond and there is nowhere more peaceful to sit, on a warm Summer evening. But Wardour Castle is quite a different place to visit in late Autumn or Winter when the gates are locked, mists hang over the surrounding pine forest and the gloaming threatens to take away the last of the daylight. The atmosphere is certainly different.

A Brief History of Wardour Castle

Tucked away, on the boundaries of Tisbury in South West Wiltshire lay the atmospheric ruins of Wardour Castle. Built in the 14th Century, it was originally a lightly fortified luxury residence owned by the Lovell family. After falling on hard times, the castle passed through several owners before being purchased in the 1600’s by the Arundell family.

The most blood-thirsty event in its history happened during the English Civil War. As Catholic landowners, the Arundell family were naturally Royalists. On 2nd May 1643, Sir Edward Hungerford and his 1300 troops lay siege to Wardour Castle after they were refused entry to search for Royalists. Lady Blanche Arundell was there alone with her children, servants and twenty-five trained fighters. Her husband Thomas Arundell had been called away on the King’s business at the time. Despite her heroic efforts to hold out, after five days of troops bombarding the castle walls with gunfire and mining, Lady Arundell was forced to surrender and abandon her beloved home. The Parliamentarians took control and garrisoned the castle.

In November of the same year, Lady Arundell’s son Henry returned to Wardour Castle with Royalist forces, looking to reclaim the ancestral home. After a four-month siege and further barraging, the castle was virtually destroyed. Eventually, it was surrendered by the Parliamentarians who had been occupying it.

Severely damaged, it was never repaired but kept as an ornamental ruin by the Arundell family. They went on to build New Wardour Castle in 1769, half a mile from the original.

The Ghostly Inhabitants of Wardour Castle

In times gone by, white owls are said to have been seen flying around the castle, warning of imminent death in the Arundell family. Since the family have now died out I would imagine this is not likely to be seen again.

The woods that surround Wardour are particularly spooky. Heading up a track into the woods you come across a short tunnel that crosses the path. The paranormal group, Twilight Shadows, twice investigated this tunnel and reported they experienced a lot of audible phenomena. You can read their report here.

The Grey Lady of Wardour Castle

It is said, as twilight approaches, you may catch sight of the vaporous looking Lady Arundell standing on the virtually ruined walls of the castle looking out, deep in thought. She has also been spotted walking the grounds within the castle or down towards the pond. A sudden chill in the air can precede her appearance.

Author Kathleen Wiltshire collected many stories about folklore and sightings of ghosts, back in the 1970’s. Her three books are filled with stories passed on from times when the county was incredibly rural and far more mysterious than it is today. Many of the accounts in her books date back to the 19th Century. Here’s one account Kathleen collectedof a figure at Wardour.

Some years ago the Headmistress of the school in the village of Swallowcliffe told of her experiences at Wardour. This lady was psychic. She had seen the glost of the lady by Wardour Castle Lake and also what she described as ‘Choirboys’ walking up the paths and passing by a window of a farm in the district. The head gamekeeper’s wife, who lived in the lodge at the entrance to the old castle, and not fifty feet from the lake’s edge, also had seen the lady’s shade there.’

Many visitors over the years have reported witnessing a ghostly figure walking down to the lake. This beautiful, romantic setting of Wardour Castle has such a history. It is inevitable, I guess, that some of its past visitors and residents may still be hanging about.

I have had a strange experience of my own within the grounds of the castle. I try to take a pragmatic view of ghosts, as although I am a believer of ‘something’ I’m not sure what it is I believe! This experience could be attributed to a bit of a light-headed moment but still, it was rather strange.

I was actually within the grounds of the castle with my partner and wandering around the ruins. It was a nice day and we strolled over to where the grotto is located. I remarked to my partner Nick that I didn’t get a nice feeling about this part of the castle grounds but I often think the feelings I can get sometimes could be nothing more than my imagination. Whilst examining the gnarly little building I began to feel my legs become heavy. I felt rather faint and it was as if my energy had suddenly just drained out of me.

Whilst I do not in any way regard myself as psychic, I would say I am sensitive to energy and situations. I am an intuitive person and an empath and I quite often pick up on feelings from other people.

That being said, I am fit and healthy and have low blood pressure. I have never fainted. And I have never before or since felt like I might ‘need to sit down’.

I had to sit on the grass for several minutes and I really felt like I couldn’t go anywhere. I was very light headed and lacking in energy but I didn’t know why. After I felt able to get up and left this area of the castle, I felt my energy lift and was totally back to normal. It was very strange.

I have been back into the grotto since then but have never managed to recreate that feeling. Was I just feeling a bit faint or did some unseeing force need to sap my energy up for some reason?

This photo has recently come to light when a lady was looking through old photo discs during lockdown.

Carol Earl visited Wardour Castle back in 2007 with her daughter. They took this photo using a digital camera and only realised, when they got home, that there was figure in the background.

Carol said. “I was quite surprised, quite excited. There was absolutely nobody there at the time, nobody walking by, nobody in the vicinity.”

What do you see? I’m not sure it’s Lady Arundell but perhaps a more modern ghost wearing glasses and walking with a cane.

Have you ever been to Wardour Castle and seen the grey lady? Or do you have a ghost story you would be willing to share?