Crop Circles in a Year of Covid 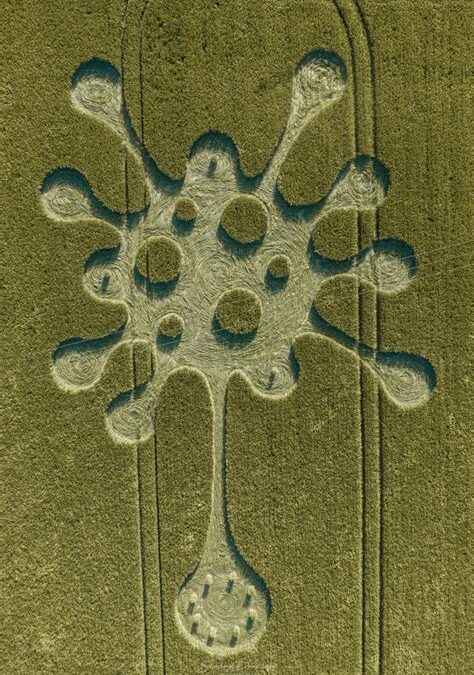 I came across these amazing photos of crop circles, discovered in Wiltshire in late May 2020. One looks like a Chinese yin and yang symbol. The other is uncannily similar to a cartoon Covid viral droplet. Is that the right science word there? I’m not sure! It made me think about writing a bit about crop circles since so many of them seem to turn up in weird Wiltshire!

Here’s a video of the two circles mentioned above-

I remember visiting a crop circle, back in 2004, in a farmer’s field just across the road from Silbury Hill. Each strand of wheat was bent over at exactly the same height. It was so neatly done, especially given the size of it. It was hard to believe something so intricate could be created overnight. This was the same year I thought I saw a UFO around the Downton area of Wiltshire. But that’s a story for another day!

Here’s an awesome ariel photo of the crop circle I visited, taken by Temporary Temples.

What is a crop circle?

Crop circles have been around for centuries. They are mysterious phenomena, arriving overnight in fields of crops. In the UK they tend to be in cereal crop fields, such as barley and wheat. Large intricate geometric designs and patterns appear in the field, created by flattening patterns into the crops. Each crop circle has a unique design.

Some crop circle enthusiasts believe they were first recorded in a news pamphlet, The Mowing-Devil or Strange News Out of Hartfordshire in 1678, which shows a devil-like creature stomping down crops in a field. More reports spring up at the beginning of the century but the majority of are from the 1970s onwards.

Many crop circles appear in and around the ancient monuments of Stonehenge and Avebury and also appear to be connected to long barrows, stone circles, earthworks and old roads. Of course, Wiltshire is choc-full of historical sites such as these, making it a hotspot for crop circle activity. In fact, in 2003 nearly half of all crop circles were found within 15km of the Avebury stone circles. The majority of crop circles appear in late July/ August, just before the harvest is bought in.

Extra-terrestrial believers contribute these strange, intricate and incredibly amazing designs to visiting aliens who wish to leave a message for us earthlings. For many years no one knew where they came from. The designs were so accurate, many felt it could not be contributed to people, especially as they sprung up overnight.

In 1991 Doug Bower and David Chorley admitted to being behind many of the phenomena in the South of England, since the 1970s. They claimed to use a simple piece of wood and rope, as tools. In theory, this debunked the idea that aliens are responsible for crop circles but it is still a contentious issue. Many folks around the world still believe crop circles are not man-made.

Doug and David’s revelation did not convince everyone. Many people still believe secret messages are being left by aliens. Check out this video filmed near Oliver’s Castle near Devizes, showing some strange lights swirling around a field. Elaborate hoax or real evidence? What do you think?

This is following footage from 1996 of a similar light, flying around the same area. Coincidence?

As always with anything ‘unexplained’, there are people ready to believe any wild theory flying around. Some sceptics may need more convincing but are open to ideas. And some automatically think the unexplained is a load of tosh!

Me? I’m inclined to think most crop circles are man-made but, as usual, I am keeping an open mind. It could be down to extra-terrestrial visitors to earth!

If you are interested in finding out more about crop circles, attending the next ‘Temporary Crop Circle Conference’ or if you are looking to purchase an ariel photo of any crop circles in Southern England, this company sell them. Take a look!

Have you got any photos of crop circles in Wiltshire? If so, email them over or find me on Twitter or Facebook.