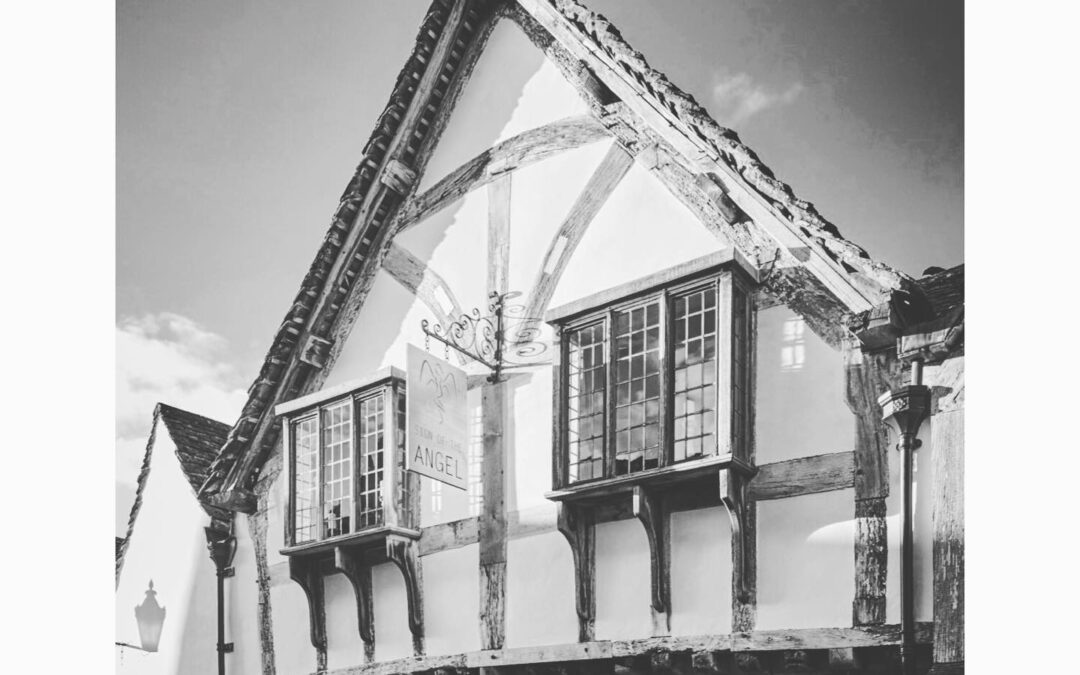 The Sign of the Angel, Lacock ghost has been seen on a few occasions and is even advertised on their sign by the door. It’s not surprising this pub has at least one ghost, given it’s history! It’s a well preserved example if one of the many old pubs and inns you can find across weird Wiltshire. At this present time, the pub count in Wiltshire is around 920. Being such an ancient county, quite a few of them date back to the 15th Century and some even before that. Bearing witness to so many events over time, it’s no wonder many of them report stories of hauntings and ghostly goings-on.

Thought to have been built in 1480, this beautifully historical inn is to be found in the village of Lacock in the North of Wiltshire.

Throughout it’s history it has been both an inn and private residence. During the 19th century, Parish meetings were held in the building. The name is thought to be related to an ‘angel,’ found on an old English gold coin, depicting St. Michael the Archangel on one side. Or it could be the ‘sign’ was related to the sighting of a nun, given the inn was near Lacock Abbey. Following the Dissolution of the Monastries in the mid 16th Century the public would perceive seeing a nun as a holy event, as they would if they had seen an angel.

A grade two listed pub, Sign of the Angel retains it’s traditional English feel with wooden beams and stripped back flooring. Some of the wooden panelling inside still remains from Tudor times. Over the centuries it must have seen many deaths, births, happy and sad times, murders and arguments. If walls could talk this place would have plenty of stories!

The main Sign of the Angel, Lacock ghost is the elderly lady seen sitting at a table in the lounge waiting for service. It’s thought she may be an old landlady. Apparently, she is quite unthreatening and has been seen several times by staff and customers.  She has also appeared upstairs in the guest bedrooms.

I found this personal account of the Sign of the Angel, Lacock ghost on hauntedwiltshire.blogspot.com, left by a lady called Susie:

I grew up in the Sign of the Angel. The carpet fitter saw the ghost around about 1965 -1970. He came in the late afternoon one winter’s day to fit a new carpet on the stairs. My parents were out and he was received by Mrs Bett Jennings. She later said he suddenly appeared before her looking as white as a sheet and saying that he could not stay longer as he had seen a ghost. The ghost walked from the entrance to an old staircase to the attic, [removed years and years before], down the stairs to the door to the dining room.

Rachel Browning from EVP Voices spent a night at the Sign of the Angel. She is particularly interested in capturing electronic voice phenomena and managed to pick up some interesting recordings which she has kindly given me permission to post here.

This was recorded at 11pm. Rachel felt it was a child like voice. She said there were no sounds of children in the rooms or corridors.

This one speaks for itself and was apparently all the man said!

This was a stand alone comment. I wonder what they won’t do for all eternity.

It’s unclear who this voice was referring to. Rachel or someone unseen?

Rachel says she tried to find out if there was any connection between Dale Armson and the inn. Unfortunately, she was unable to find out any information. This is an incredibly clear recording.

I commented to Rachel that it would be so interesting if we could put the voices into context. Who do these voices belong to and where are they now? What is it we are actually hearing? This is what she said:

“Sadly, with EVP, there is very little chance of knowing whom you are recording, or where they might be. All I can say is that there were no other people physically present at the time of their capture. Without that knowledge, the only clue I have to a speaker’s identity is their message. In the case of all of the featured five clips, only one had a remote chance of being traced, but I failed to find any link with the name Dale Armson, to the inn. It’s a curious phenomenon. It pulls you in but you never quite fathom it!”

For more interesting EVPs I recommend the group’s website: www.evp-voices.info

Have you ever visited Sign of the Angel, Lacock?

I love to hear about people’s ghost stories and paranormal experiences. Have you got a tale you’d be willing to share?