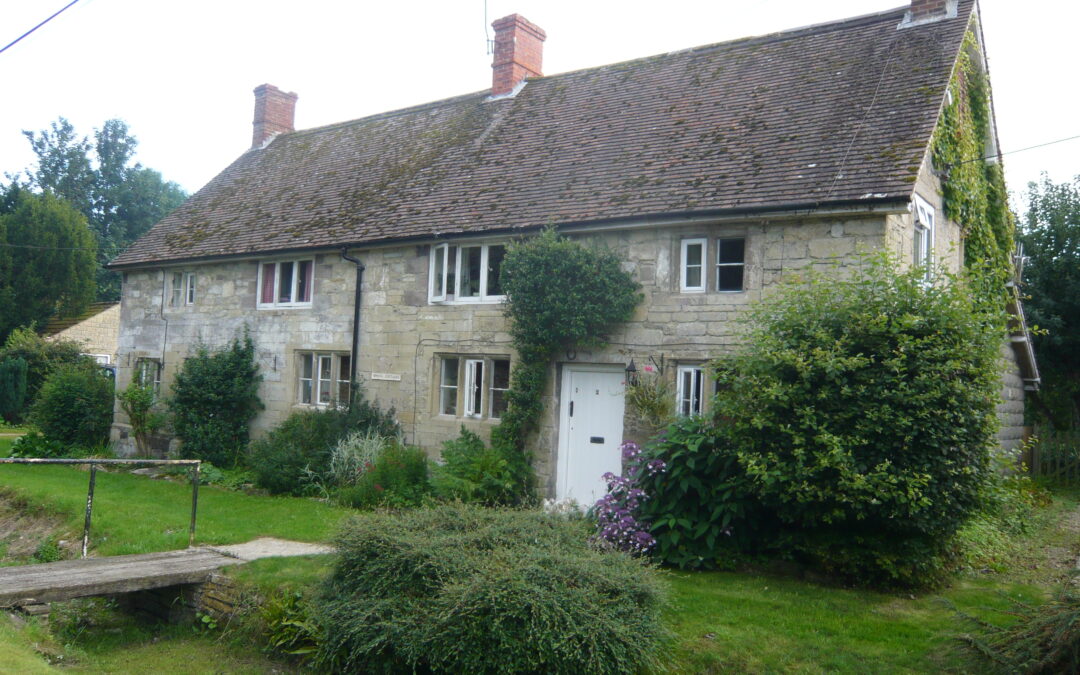 This is a personal tale about a farm cottage, called Spring Cottage, in Chilmark, Wiltshire that I rented with my boyfriend.

It was a quaint little two-bedroom cottage with small windows and thick stone walls, dated 1876. We were looking to move out of Salisbury into one of the quiet villages in the South West of Wiltshire. I had lived in various cottages in the villages surrounding Salisbury as there were always plenty of rental properties about. At the time I was working in sheltered housing schemes in the area and Nick was an agricultural electrician in one of the local villages so it seemed a good idea to move out that way. Our little dog was coming with us and I had arranged to move my horse to a local farm.

We looked at a couple of other cottages before we viewed Spring Cottage. As soon as I saw it, I knew it was the cottage for us. A small stream ran along out the front of the cottage and there was small wooden bridge leading to the front door. There was a climbing plant over the front door and various flora and fauna trailing around the place. The rooms were small and the downstairs was rather dark but it was neat and tidy and perfect for us. Filled with furniture and our belongings we felt it would be cosy. There was a good-sized garden and garage.

In January of 2008 we moved in. Straight away we felt quite at home but I was very aware of a feeling of ‘history’ in the cottage. There was a kitchen built onto the back of the original cottage and two small receptions rooms at the front of the building. We decided to use the smallest room as a snug lounge and the slightly larger room as a dining room/ spare space.

The lounge had just enough space for a corner sofa, our television and a couple of book shelves where I housed my rather large book collection. We added an extra halogen heater as the cottage was not warm with only a couple of storage heaters throughout and a log burner in the next room.

Books go ‘bang in the night’

My first experience of something unusual happening in the cottage was within the first couple of weeks. I was often up before 6am each morning to go and walk Woody the dog and tend to my horse before heading off to work. It was not unusual for me to fall asleep on the sofa in the evening. On this particular evening I had dozed off. I think Nick had gone to bed earlier and had left me watching tv. I awoke suddenly when two books, one on either end of one of the shelves, fell over. Being a bit dazed and confused after waking up I didn’t really think much of it but it was a bit weird that two books on different ends of the same shelf had fallen over at pretty much the same time.

It was a couple of days later and I had fallen asleep again when I was woken up by another book just tipping over. I mentioned it to Nick as my instant thought was, ‘it was a ghost.’ He thought I was being a bit silly and suggested it was just the way they were stacked. They weren’t stacked any differently from any other time I had books on a shelf and why did they fall over when I was asleep in that room? I did remember feeling a bit unnerved by the whole situation. Whilst I didn’t have any negative feelings about the cottage, I wasn’t really sure I would be comfortable with strange goings on in my home.

At the time I was driving into Hampshire once a week to learn how to read tarot cards. I have always had an interest in the strange and unusual and whilst I never claim to be psychic, I do ‘feel’ things and have had a lot of weird experiences. That being said, I try to be pragmatic and stop my imagination running away with me. I realise I do have my head in the clouds quite a lot! I told my tarot card teacher about my new home and the book incidents and she said, if I was worried, I should light a white stick candle that could be left to burn down. Tell ‘the spirit’ that I was aware they were there and that I meant no harm but that their actions were unnerving me. Following this I lit a candle and left it to burn down in the wood burner overnight. I had a little chat to whoever it was, telling them I was happy to share the cottage but could they please not make me jumpy. There were no further book falling incidents and within a couple of weeks we had decided to switch the rooms around anyway to make better use of the wood burner in the evening. It was the main source of heat in the cottage after all and it was the middle of winter and very chilly.

The following Christmas my family came to stay at Spring Cottage. My parents, my brother and his partner. We shoehorned a table into the living room for Christmas dinner and took several photos. Here is one of them. I’m really not sure what it is you can see but there is a very strange mist hanging over my brother’s head and lurking around the table. He feels that he can also see a face. See what you think!

There were no other notable incidents except for the day after my nan died, when I was very sad and upset and laying around at home grieving. There was a strong knocking on the front door and I got straight up to open it. The front door led directly into the lounge. There was no one there and no one in sight. This was a quiet little street and as I looked up and down I could see nobody about. They would not have had time to run off very far before I opened it. I do believe that it could have been my beloved nan as I did always joke with her that, when she died, she had to come and give me a sign she was still about!

We lived in Spring Cottage for two and half years and I did always get the feeling of sharing it with someone. It was never a bad feeling but, at night, if I got up to use the bathroom that was downstairs, there may be someone sat in the living room. I always refused to look into the room as I passed the doorway, just in case I saw someone sitting there.

A local psychic feels a presence

I should mention we had rescued eight battery hens a couple of months after moving in and they were happily living out their time scratching about in a bit of disused woodland behind our garage. I asked around the village if there was anyone who would be interested in earning a bit of cash to look after my hens when I was away. A local lady got in touch. She came to visit me and the hens and we got on straight away. She too loved animals and I felt happy to leave her in charge of them. As she was leaving, she paused in the cottage. She turned to me and asked me ‘So you are aware of the man here?’ I asked her what she meant. ‘He was a farm hand.’ She told me. ‘He used to live in Spring Cottage. He is still here. Don’t worry. He is happy you are here and he likes your little family.’

I do believe that we were sharing the house with a previous occupant and he may have been trying to get my attention when we first moved in. Maybe that’s who joined us for Christmas dinner at Spring Cottage? I’m glad he liked us and I was happy to share the cottage if a little unnerved by what I could feel but not see. But you can’t expect to live in a cottage of that age and not expect some past tenants to still be hanging about.