A Mummified Hand at The Haunch of Venison Salisbury 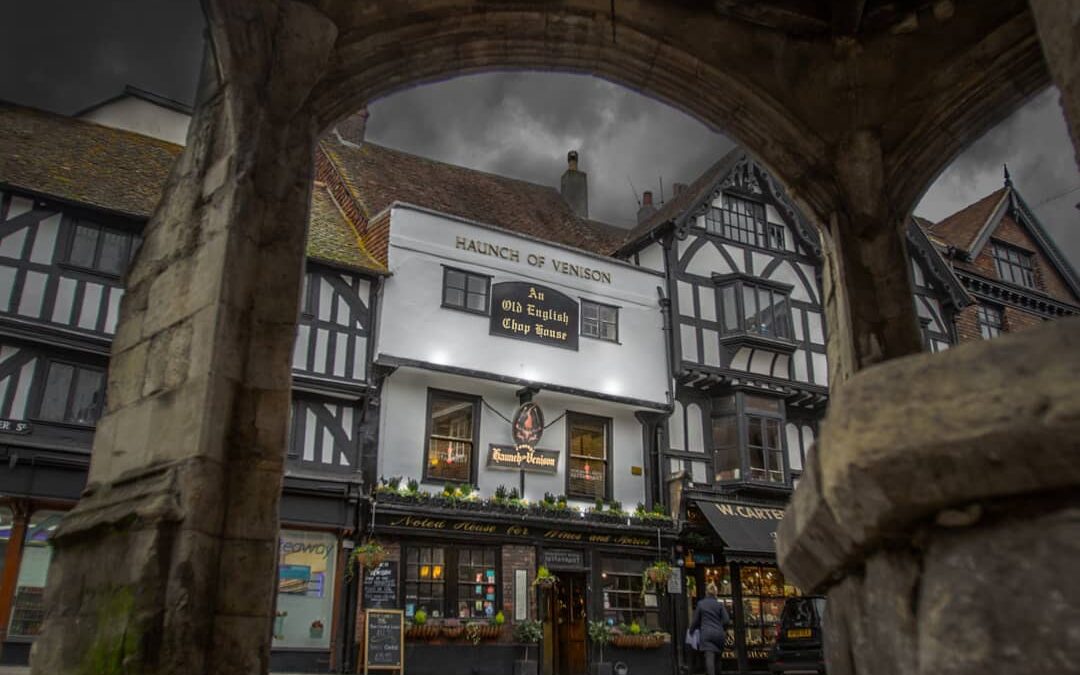 Why is a strange mummified hand under lock and key in an old bread oven in The Haunch of Venison Salisbury pub? I found out! And it wasn’t just a shrivelled hand that made this very old inn a curious place to visit…

Originally the building was used to house craftsmen working on the spire of Salisbury Cathedral. It dates back to 1320. The building wasn’t licenced until approximately 200 years later when it became a brothel and eventually an inn.

The story of the Mummified Hand

It was around 1820 when a game of whist was being played in an upstairs room of the inn. The story goes that a particularly loud and flashy stranger turned up one day, on his way to Southampton. He was met with an icy reception from the locals but animosity was erased when he tossed the pot boy a single gold coin and shouted, ‘Ale for all!’ The stranger was keen to join the game of whist, and it appeared Lady Luck was on his side. At least for a while! He kept winning each game he played. The locals started to become suspicious. Why was he winning all the time?

One of the locals, a butcher, had a few drinks too many. He became enraged by the winning player. He whipped out his cleaver and chopped the man’s hand off. Out of the cuff fell a handful of Aces, proving the man was cheating. Another account says the hand was chopped off and the cheat ran from the inn, screaming in pain. The other players looked down and spotted five bloody Aces in the fingers of the severed hand.

Fast forward a few decades, to 1911, when the severed hand made a reappearance. It was found bricked up behind a fireplace in the bar upstairs, with the fingers still holding the cards. The cheat’s hand was put into a display case in the old bread oven, recessed into the pub wall. There it stays, to this day, acting as a warning to others that cheating at cards is not tolerated at The Haunch of Venison.

The hand was stolen from its case in 2004 and the story was reported around the world. It was never recovered and the mummified hand now displayed is an exact replica of the original. The ‘Demented Whist Player’ as he is known, is said to now haunt The Haunch of Venison Salisbury.

Is it the Demented Whist Player that has been seen sending drinks flying off tables? Staff admitted that there are plenty of wobbly tables in the pub, thanks to the wonky floors, but these drinks don’t just wobble over. They are pushed. And it’s happened many times. Icy spots are felt throughout the inn, lights go on and off and items disappear, only to reappear weeks later. Footsteps are heard in the restaurant, normally between 11.30pm and midnight, when the building is empty. When staff go upstairs to investigate, there is no one there! These strange events can be accompanied by a smell of mouldy earth and leaves.

Staff at The Haunch of Venison Salisbury tell their stories

Watch this video where one of the staff team talk about the ghosts in the inn.

Here’s a story from Spooky Isles, told by a landlady of The Haunch of Venison. I’m not sure she is still there and if she has moved on to work elsewhere, I can understand why!

‘The landlady awoke to a man standing in the room watching her. He had his arms crossed in front of him. She had a box on a shelf at that end of the room which contained an angel. When she awoke the next day, the box was on the floor and the angel’s head had been snapped off. The Demented Whist Player has been repeatedly seen by others, always crossing his arms in front of him. It is thought he does this to hide his hands.’

The Demented Whist Player isn’t the only ghost…

Three whisky glasses were found in the middle of the restaurant floor one morning. On another occasion, the manager at the time had locked up for the night, having left the restaurant set out for the morning, finished off with white napkins on the restaurant tables. When he returned the next day, he was shocked to find they had all been changed for red ones!

When it comes to ghosts, there is one in particular who does not seem to like men! She is thought to be an old Madam who took care of the prostitutes who worked down in the cellar. The Madam is seen around floating around the pub dressed in dark clothing.

Searching for her murdered son

Another lady reportedly haunting the inn, wears a white shawl. She is seen inside and outside of the pub and also on the stairs up to the restaurant. It is said she is looking for her son, who was probably murdered nearby. The story goes that he had been sent with a few pennies to buy some ale around 100 years ago. The boy never returned home and there is no record of what happened to him, although robbery and murder is likely. Staff and regulars alike claim to feel her saddened presence or catch a whiff of flowers as she searches for her missing son.

Windows from the inn look out over the tiny graveyard of St Thomas’ church where a white lady has been seen. I wonder if it is the same lady?

The Haunch of Venison Salisbury is literally full of character, with uneven floors, wooden beams, bulging walls. One curiosity that is yet to be uncovered is a small wooden door, halfway up a wall. The door has been firmly nailed shut from the inside. Whilst the staff do want to know what is behind the door, they are apparently ‘working themselves up to it’! To be honest, I’m not sure I would want to open that door. Perhaps it was nailed shut for a reason!

Apparently, there is also a hidden bar, which you can only get to by going down an underground staircase. And it is said there is a tunnel that leads to the church, which I guess is St Thomas’ behind the pub. What was this tunnel for? Since the pub’s cellar was where the brothel was located, it’s probably why there is also a bar down there. It makes sense that the tunnel was used by patrons who wished to remain anonymous when leaving.

There is certainly plenty of history associated with The Haunch of Venison. I have no doubt, if walls could talk, there would be enough stories to fill many books. Perhaps I’ll write to the pub landlord. I would love to look at the cellar and tunnel, but I’m not sure they will want me poking around!

Before I go, I should mention a claim to fame that The Haunch of Venison holds. Rumour has it, Winston Churchill and Dwight Eisenhower, met in The Horsebox. This is a tiny snug used by ladies back in times when ladies weren’t allowed in pubs. It is here that these two incredibly powerful men planned the D-Day landings of World War Two.

Stay tuned for more stories from Weird Wiltshire! You can follow me on Twitter here. Or get in touch here.

I’m looking for stories. Have you had an encounter you just can’t explain? Are you willing to share it? If so, please get in touch with me here.