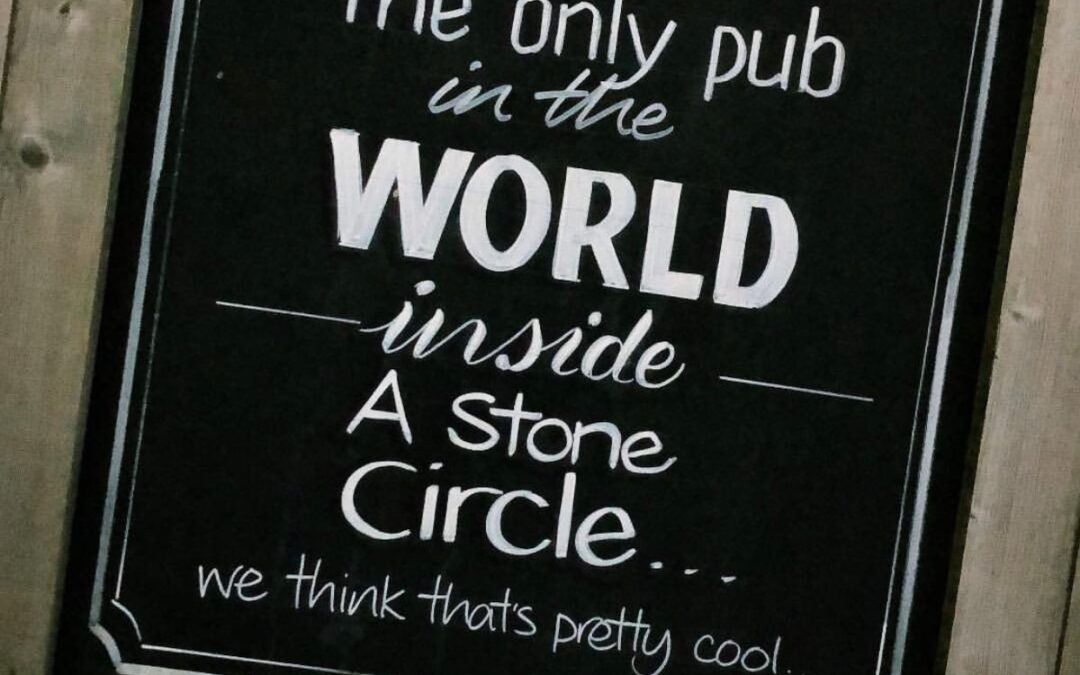 Have you ever heard of a public house that’s located within a magical stone circle? Probably not. And that’s because there is only one in the whole world! The Avebury Red Lion Inn.

It literally stands within the largest megalithic stone circle in the World and it’s been there for around 4000 years. The whole village is riddled with stories of ghosts. Could the magic of the stones amplify the energy of the place, including the Red Lion Inn? Maybe the location is one of the reasons why this charming little village pub is often touted as a contender for the most haunted pub in Great Britain.

Originally The Red Lion was a farmhouse built in the late 16th Century. In 1802 it became an inn. It’s now a Grade II listed building and runs as a pub and restaurant. Like many hostelries of this age, the inn has seen its fair share of trials and tribulations over the years. These have certainly left their mark and present themselves in the form of several resident ghosts.

Can you hear the coach arriving?

On occasion around the hour of midnight, the sound of a ghostly coach and four set of hooves clatter across the cobblestones in front of the inn.

A local lady called Mrs Spackman was married to a farmer at Beckhampton. The couples were friends with Mr and Mrs Neate, the innkeepers who lived there in 1893. Mrs Spackman maintained she had heard the sound of the coach arriving several times when visiting her friends of an evening. The group would jump up and pull open the door to catch a glimpse of the phantom visitors. But, there was never a soul to be seen.

Another resident of Avebury, Mrs Bathe, confirmed the four-in-hand (the term for a horse drawn vehicle pulled by four horses) had been heard on other occasions. Again, never witnessed. This was in 1968.

The tragic murder of Florrie

Florrie is the most widely witnessed ghost of the Avebury Red Lion. Poor Florrie was a young wife whose husband was away fighting in the English Civil War. On his surprise return, he found Florrie in the arms of her lover. In a rage, he killed them both. Depending on the account, she was either strangled or had her throat slit. The husband threw Florrie down the village well in a panic and her body has never been recovered. The well is now within the building, having been swallowed up when the inn was extended. What happened to the lover is unknown, but Florrie’s husband was caught and hung for his crimes.

Florrie is a dark-haired apparition, wearing a tight waisted, long dark dress with full sleeves. She is seen in the female toilets. It is thought she is responsible for moving around cutlery and salt and pepper pots, as well as other poltergeist activities. A radio playing in the morning when it was switched off the night before. Electrical switches tripped out for no reason. Doors opening and phantom footsteps.

She seems to strongly dislike men with beards and one chandelier, in particular, has been known to swing wildly when a bearded man is near. When visited by the Most Haunted team, the landlord Richard Bounts and retired cellarman Fred Wall were interviewed. Richard recounts one bearded gentleman being quite outspoken about ghosts being a load of rubbish. At that point, the chandelier began to swing about violently above his head. Apparently, he made a hasty retreat from the pub after that. Fred also recalls an incident where a bearded bartender was once hit directly in the face by a glass that had flown off the wall.

As far as terrifying ghostly events go, what must be truly frightening is the sight of Florrie attempting to crawl out of the 86 foot deep well. She has been seen climbing in and out of the well on a couple of occasions. I doubt you would ever look down there again if you witnessed that scene.

Should you ever visit the Avebury Red Lion, have a peep down the well, if you dare. It’s been covered in glass and is now used as a table. I’m not sure I’d be doing that in the middle of the night, though. No Sir!

Four years ago, I was having a break in Bath with my daughter. She was unwell that day but insisted I go to Avebury anyway. I had taken some flowers with me with the intention of visiting West Kennett afterwards.

Arrived about lunchtime and the pub was filling up nicely. The only free table was directly in front of the well. I sat waiting for my food to arrive, reading a magazine, when I heard a noise to the left of me. All that was there was my bag with the flowers and then the wall. I looked around but couldn’t see what the noise was. The room was full of people chatting and had a good vibe. I went back to my magazine when I heard it again. This time when I looked round, I noticed the paper that the flowers were in, moved! In the middle, it folded right back, then forward! I was amazed. I’m a bit of a cynic but I got a feeling that whatever it was wanted some of my flowers.

I asked a young passing waitress who couldn’t give me any info. Then I remembered the ‘witchy’ type shop across the road. I went and asked the lady in there who told me Florrie’s story. She also said that Florrie only shows herself to people she thinks are ok! So, I was really happy at that. Went back to the pub and I asked the waitress to leave some of my flowers for her.

I believe The Red Lion no longer rents out rooms but it did until 5 or 6 years ago. Two of the bedrooms, in particular, are known to be haunted, The Private and The Avenue. Two children have been seen playing on the landing outside the bedrooms and squeezed into a corner of The Private bedroom, looking scared. A mysterious lady has also been seen sitting at a desk, writing and staring out a window. One record calls this lady Beth, but I have found nothing to collaborate this information.

The Private Room is constantly cold and somewhat unwelcoming. Guests that have stayed in the room don’t tend to stay there again. Two other separate ghosts have appeared beside the beds in these rooms. One male, one female. Sudden temperature drops are a common phenomenon even during the summer months.

In case you are interested in a personal account of a stay in one of the bedrooms, have a look at this:

Before 1802, when the inn was a farm, some outlaws were sheltered by the farmer in the cellar. Something must have gone wrong as the farmer was murdered by the gang. The farmer’s ghost has been seen on occasion, bloody and holding onto a knife.

As if the phantom coach, Florrie and the betrayed landlord aren’t enough, there are also reports of other ghosties.

“Two of my daughters saw a boy and girl in the female toilets there about 18 or 19 years ago. They were looking right at them as clear as day then vanished.”

“Seen the 2 children and have had the straps on my rucksack tugged when stood at the bar, turned around thinking it was a friend and there was nobody there.”

Is the rest of Avebury haunted?

As you can imagine, since the whole of Avebury is located within the magical stone circle, The Red Lion is not the only haunted location in Avebury. Avebury Manor, The Lodge, St James Church, Silbury Hill, West Kennet Long Barrow. Spookiness occurs on the road that cuts the circle in two. There are many spooky goings-on around the Stone Circles themselves.

I’ll be returning to the Avebury Red Lion in the future to explore the other ghostly locations. Subscribe to my updates if you want to find out more or find me on Twitter.

Wiltshire Stories of the Supernatural by Sonia Smith

Ghosts and Legends of the Wiltshire Countryside by Kathleen Wiltshire

More Ghosts and Legends of the Wiltshire Countryside by Kathleen Wiltshire

The Haunted Landscape by Katy Jordan