Whose footsteps rattle around the Boston Tea Party in Salisbury? 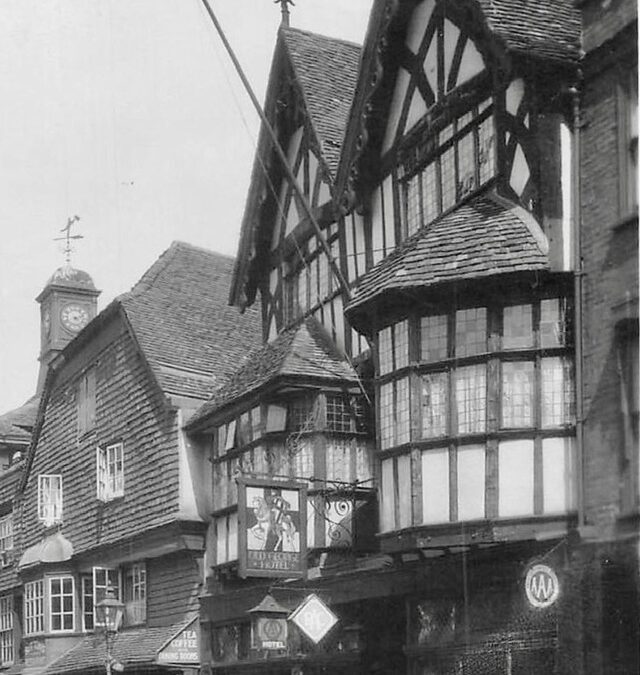 You may have heard of Salisbury. It’s a small city in South Wiltshire with a long and interesting history. Mostly it is famous for its breathtaking cathedral, proximity to Stonehenge and in 2018, a Novichok attack on an ex-Russian spy.

There are many old buildings, 13th Century onwards, in the city centre. The Boston Tea Party in Salisbury, is one such building but it’s also known as The Old George Inn and is situated on the High Street. This is the road that leads to the cathedral. We’ll be hearing about The Old George Inn shortly. But first, here’s a little tiny bit of folklore about the cathedral…

A legend about the cathedral

Legend has it the current cathedral, which started to be built in 1220, was sited after an arrow was fired from Old Sarum (the old settlement site). The new cathedral was built up, stone by stone, from the spot where this arrow had landed. Another legend adds that the arrow actually struck a white deer. The poor creature ran off but eventually dropped down dead on the site of the present cathedral. And this is why the great and the good decided that particular meadow was the most excellent place to build a cathedral.

Salisbury is a very old city. As we know, places with long histories tend to have more than their fair share of ghosts, legends and horrible tales. Salisbury is no exception! You may have already read my blog about the most haunted pub in Salisbury, The Haunch of Venison, but if you haven’t, check it out here.

The building I will tell you about today is situated just around the corner from The Haunch of Venison in the city centre. There have been buildings on this spot for centuries as lodgings and conveniences would have been needed for the many craftsmen and builders working on the cathedral.

One of the oldest inns was called The Old George Inn. It’s now a Grade I listed building, which means it’s very old, historic, and has impressive built features protected by historical building law.

Being interested in old buildings and all their history, I was drawn to this place from the first time I visited. The inn has long since closed and is now a branch of the Boston Tea Party’s coffee shop chain. It’s my go-to coffee shop whenever I am in Salisbury and in need of a cuppa. In fact, I end up having a coffee there most Friday afternoons while I wait for one of my tots to finish dance class. That time of day is relatively quiet at Boston Tea Party. I took advantage of the slower pace by quizzing some of the staff. With it’s dark wood panelling, creaky floors and wonky stairs I guessed there had to be some sort of ghostly activity in the building.

‘What’s the story with this place? Are there any ghosts?’

I spoke to several of the team, including the manager and a couple of assistant managers. Most agreed the place is pretty creepy at night when it’s empty of customers. The managers tend to be left alone in the building cashing up after the coffee shop closes and they are the ones that have been witness to some ghostly phenomenon.

Footsteps are a reoccurring theme, mainly heard in the uninhabited loft room and along the balcony type corridors that run past the office. It’s worth pointing out that the ground floor is the coffee bar and a seating area. On the first floor, there is a large seating room, a smaller seating area and a couple of meeting rooms. There is also the kitchen and office area. On the top floor is the attic. It is only used as a storage area for things that may only be needed once in a blue moon. It’s not massively safe underfoot so it is only accessed if totally necessary.

The main phenomena are footsteps heard on the wooden floors of the first and top floor. One assistant manager told me she does not like to be the last one at work, cashing and locking up. She said she had witnessed the shadow of someone’s feet walking past a door, the shadow coming from under the door’s crack. And lots of footsteps. She also said that there was a huge crash up in the attic one evening. A set of ladders stored up there for ages, leaning against the wall, were found on the floor.

Another staff member told me of the footsteps he has heard on the upper floors several times. When he has gone to investigate, there is, of course, nobody there. He too has seen the shadows passing by the bottom of the office door, heading towards the attic stairs.

The other weird audio this staff member has heard is of voices and talking up in the attic. Like a meeting or drinking session is going on. Again, the attic is empty! He also told me of secret underground passageways which lead from the basement area away from the building. They have been deemed unsafe and blocked up with plasterboard, but it seems to be a reoccurring theme with Salisbury’s city pubs and inns. The Haunch of Venison has underground tunnels as well. We both agreed we’d love to go down into the tunnels to see where they go!

My guess is that these tunnels allowed clergy from the cathedral to come and drink at the inns without their faithful subjects noticing what they were up to. Just because you are a priest or monk, it doesn’t mean you don’t like a pint of beer or two!

Apparently, when the building was being renovated and turned into a coffee shop, workers tools would be moved around the locked building every night.

The Old George Inn has several claims to fame with famous visitors over the years. Shakespeare and his team of players are said to have stayed at the pub and performed ‘As You Like It,’ in the courtyard.

In 1645 Oliver Cromwell stayed at the inn on his way to join his army.

Samuel Pepys came to the inn on Wednesday 10th June in 1668 for a good meal and a place to rest his head. Of the inn, he said.

“Come to the George Inne, where lay in a silk bed; and very good diet. To supper; then to bed.”

Ed, the manager of Boston Tea Party in Salisbury, and his team were kind enough to let me have a peek around the building on Friday so I could take some photos. It’s such an attractive old place, even without the ghostly element. If you enjoy wooden panels, bunched pillars, oak timbers and stone fireplaces, rough and uneven floors, Tudor plasterwork decorations and unique bay windows, you should definitely visit.

I was most interested in going up into the attic. It reeks of history! You can see the wattle and daub plaster and massive ancient wooden timbers. You have to watch where you are going. Some of the floorboards are missing!

I was not expecting to witness anything strange going on up there. I wanted to take a couple of snaps and move on. But, one peculiar thing did happen. My phone, which I fully charged earlier in the day because I knew I would need the camera, suddenly flashed up that it only had 20% of battery left after taking one photo. Strange! It’s a relatively new phone and was definitely fully charged. Could it be from an energy drain?

So, it does seem someone from the past is still hanging around. Just being at the Boston Tea Party in Salisbury, you get a sense of the age of the building and history of the place. And, if you believe the staff team, someone is definitely still stalking about the building. Maybe a past landlord or patron? Who knows?

I’m sure there is much more going on at the Old George Inn late into the night. It’s just no one is in the building to witness it!

Have you been to the Boston Tea Party in Salisbury and witnessed anything unusual? Or perhaps you have a story from elsewhere that you may be willing to share?

I’m always looking for people’s stories of anything strange and unusual, from Wiltshire and the big bad World. Please get in touch if you’d be willing to share.